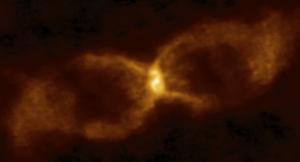 This cosmic hourglass is the remnant of Nova Vulpecula, a brilliant "new" star that appeared in Vulpecula, the fox, in 1670. Recent research says the original outburst took place when a stellar corpse ripped apart a companion known as a brown dwarf -- an object that's not massive to shine as a true star but too heavy to be classified as a planet. Some of the brown dwarf's hot gas funneled onto the corpse, known as a white dwarf. And some of the gas formed "jets" that spewed out into space, forming the hourglass figure that we see today. [ALMA (ESO/NAOJ/NRAO) S.P.S. Eyres]

Stars don’t always play nice. 350 years ago today, for example, an astronomer in France noticed a bright new star in the sky. It wasn’t actually new, though. Instead, it was the result of a dead star ripping apart a companion object.

The “new” star is known by several names, including Nova Vulpecula 1670. It’s in Vulpecula, the fox, quite near the “bill” of Cygnus, the swan. It’s a third of the way up the eastern sky as night falls right now.

When it first appeared, Nova Vulpecula was bright enough to see with the unaided eye. It faded, then flared up twice more over the following couple of years before vanishing entirely.

During the 20th century, astronomers first thought the object was a nova. Such a blast is caused when hot gas stolen from a companion star piles up on a dead star known as a white dwarf. But measurements didn’t seem to match that kind of explosion. So a couple of years ago, astronomers came up with a new explanation: the merger of a white dwarf and a brown dwarf — an object that wasn’t heavy enough to shine as a true star.

The two bodies passed close together, and the gravity of the white dwarf pulled the brown dwarf apart. Some of the gas formed a hot disk that funneled onto the white dwarf. And some formed “jets” that shot out into space from the white dwarf’s poles. That formed a nebula that looks like an hourglass. The nebula is still there, and still growing — the beautiful remnant of a stellar merger.