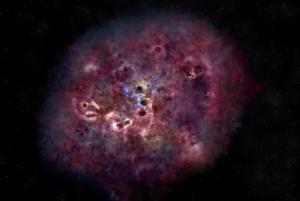 An artist's concept depicts a massive young galaxy that is giving birth to millions of stars. Astronomers have recently studied one such galaxy, XMM-2599, which gave birth to huge numbers of stars early in its evolution. Star formation quickly shut down, though, perhaps as a result of a strong "wind" from a supermassive black hole. Radiation from a disk of superhot gas around the black hole could push charged particles away from the black hole, sweeping away any surrounding gas. If the wind is strong enough, it could clear out star-forming gas and dust from the entire galaxy. [NRAO/AUI/NSF/B. Saxton]

For 500 million years, the galaxy known as XMM 2599 churned out the equivalent of a thousand suns per year. Then, about 12 billion years ago, the star factory shut down — the galaxy stopped making stars at all.

Black holes themselves only pull things in. Anything that falls into a black hole is lost — nothing can come back out. But as gas and dust fall toward a black hole, they form a wide, thin disk around it. As material piles up in the disk it gets hot — up to millions of degrees. At that temperature, it produces a strong “wind” of charged particles.

The black holes in the hearts of galaxies are millions or billions of times the mass of the Sun. So the disks around them can be huge and brilliant. And their winds can be massive. They can “blow” outward at up to a quarter of the speed of light. And like a strong desert breeze blowing sand, a black-hole wind can blow away the gas and dust around it — hundreds of times the mass of the Sun per year. That can shut down starbirth in the surrounding galaxy.

But the picture is complicated. Black-hole winds can also cause the birth of new stars. The winds can squeeze clouds of gas and dust, causing them to collapse and create stars — all in the hot wind from a black hole.