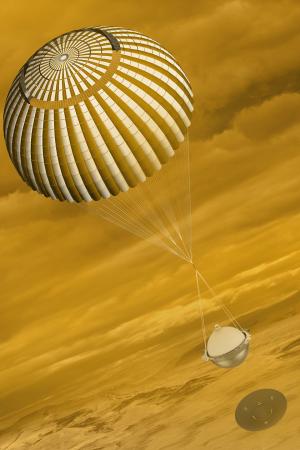 A small instrumented capsule parachutes through the thick atmosphere of Venus in this artist's concept. Known as Davinci-Plus, it's one of four solar system missions that NASA is considering for funding in the next year as part of its Discovery program. The others are another Venus craft plus missions to Io, the volcanic moon of Jupiter, and Triton, the largest moon of Neptune. [NASA/GSFC]

Venus is hidden from view — in more ways than one. It’s passing between Earth and the Sun right now, so it’s hidden in the Sun’s glare. And even if we could see it, we couldn’t really see it. The planet is blanketed by clouds, so its surface is always hidden. The only good looks we have are from a few Soviet landers — which survived for only minutes — and a few orbiters that used radar to peer through the clouds.

The view could get better in a few years, though. NASA’s considering two new missions to the planet — plus two to the outer solar system. They would explore Io, the volcanic moon of Jupiter, or Triton, the largest moon of Neptune.

The missions are part of the Discovery program. It sends out fairly inexpensive craft to study the solar system and beyond. Its missions have orbited an asteroid, grabbed samples of a comet, found evidence of water on the Moon, and made detailed maps of Mercury.

This year, the program selected four proposals for detailed study, including the Venus missions. Veritas would use radar to make 3D maps from orbit. And Davinci-Plus would measure the clouds as it drops to the surface, snapping pictures all the way down. The Io craft would fly by the active moon several times, learning more about how its volcanoes are powered. The Triton mission would fly by it a single time, mapping the moon and learning whether it has a hidden ocean — making more discoveries about the solar system.