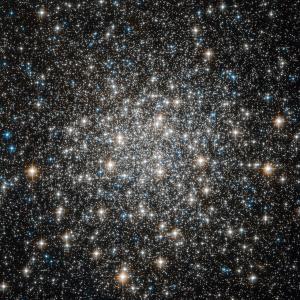 Thousands of stars festoon the core of Messier 10, a globular cluster that's 14,000 light-years away, in the constellation Ophiuchus. It's one of the least-impressive of the Milky Way Galaxy's globulars, although it's closer than most of them, so it's a good target for binoculars. The cluster's stars are some of the oldest in the galaxy. This image was snapped by Hubble Space Telescope. [ESA/NASA]

Ophiuchus, the serpent bearer, climbs high across the southern night sky at this time of year. The constellation’s main pattern resembles a coffee urn. It’s on its side, low in the east, as night falls, but stands upright after midnight.

Ophiuchus is north of Scorpius and Sagittarius, which point the way to the center of the Milky Way Galaxy. As a result, many star clusters are found inside its borders. The list includes 10 fairly bright globular clusters — tight balls of hundreds of thousands of stars.

The one that’s most impressive to look at is Messier 10. It’s near the middle of the urn, and spans about half the size of the Moon. It’s a good target for binoculars, and a very good one for telescopes.

The cluster looks so impressive mainly because it’s close — about 14,000 light-years away. It’s about 225,000 times the mass of the Sun. That’s a lot of stars. But it’s puny as globulars go. Most of the other clusters in Ophiuchus are much heavier.

Messier 14, for example, is a million times the Sun’s mass. It doesn’t look as bright as M10, though, because it’s twice as far. And Messier 62 is even more impressive — about one-point-two million times the Sun’s mass. It’s closer than M14, but there’s more dust between M62 and Earth, which blocks some of its light. Even so, it’s visible through binoculars — one of the beautiful clusters of the serpent bearer.