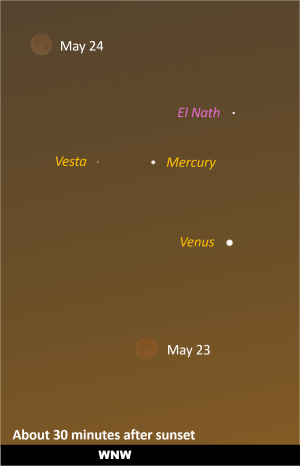 The crescent Moon will sweep past the planets Venus (the "evening star") and Mercury, plus the asteroid Vesta and the star El Nath on the evenings of May 23 and 24. Vesta is too faint to see without binoculars. The view is better on May 24, when the Moon will be higher in the sky and the entire grouping will be visible a little later, when the glow of twilight is less prominent.

A quartet of similar worlds huddles low in the western sky at sunset the next few evenings – the Moon, two planets, and an asteroid.

The Moon is quite low in the sky this evening. It’s also the thinnest of crescents – the Sun illuminates less than two percent of the lunar disk. So it’s a bit of a challenge to find.

The planet Venus is close above it – the brilliant “evening star.” The fainter planet Mercury is a little higher still. And the asteroid is Vesta, to the left of Mercury. You need strong binoculars or a telescope to pick it out.

All four of these objects are “differentiated” – they’re made of distinct layers. At the center is a solid metallic core. There’s a mantle of rock around the core, wrapped in a crust of volcanic rock.

Vesta is the smallest body in the solar system to have such a layered structure – it’s just 325 miles in diameter. A research team recently learned more about Vesta’s history by studying pieces of the asteroid – meteorites found in Antarctica. They revealed that Vesta was volcanically active for at least 30 million years after its birth – longer than expected for such a small body. Vesta might have had oceans of molten rock just below its surface. They helped keep it warm for a long time. And that helped build Vesta’s layered structure.

Again, look for this quartet low in the west right after sunset. The Moon will have climbed above the other three bodies tomorrow evening, enhancing the view.