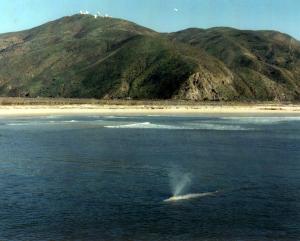 A gray whale swims off the coast of California. Recent research suggests that changes in Earth's magnetic field caused by storms on the Sun may confuse some whales and dolphins, causing them to strand themselves on the beach. [U.S. Navy]

Storms on the Sun can have unpleasant consequences. They can damage satellites, force airlines to reroute flights, and even cause power blackouts. And for some marine mammals, they could be deadly.

Dolphins and whales occasionally strand themselves on the beach. Biologists say there are many possible causes: injury, disease, human-made sounds, and others. And in recent years, they’ve even found a possible link between strandings and solar activity.

Dolphins and whales may use Earth’s magnetic field to navigate. Solar storms can change the contours of the field. So researchers have suggested the storms may “scramble” the navigation system – like passing a bar magnet near a compass.

A recent study, though, says the problem isn’t changes in the magnetic field. Instead, it may be bursts of radio waves from the storms.

Researchers looked at 35 years of strandings of grey whales. They eliminated whales that were sick or injured, or that might have been confused by sonar or other loud sounds. They then compared the remaining strandings to changes in Earth’s magnetic field, and to outbursts of radio waves.

The results showed no relationship between strandings and changes in the magnetic field. But there was a relationship with the radio bursts. In fact, the whales were more than four times as likely to strand during those outbursts. So storms on the Sun can be bad news for these beautiful creatures.