Vanguard 1 has been orbiting Earth for more than 60 years — longer than any other spacecraft. And it’s expected to stay in orbit until late in the 22nd century.

Just about every other spacecraft is expected to crash to Earth much sooner. Most will burn up in the atmosphere, or splash into the oceans. But a few will hit land, perhaps harming property or people.

The odds of such an impact are getting better all the time. More than 9,000 satellites have been sent into orbit, and about half are still there. And the number of satellites is expected to rise dramatically in the next few years.

There’s lots of other stuff up there, too — debris from exploded rocket stages, for example. These projectiles could damage or destroy spacecraft — creating more pieces of debris that could fall to Earth.

Some satellites are targeted to splash into a lonely region of the Pacific Ocean. But controlled re-entry adds to a mission’s cost.

Most commercial satellites are insured against the possibility that they’ll cause damage or injury when they hit the ground. And satellite operators are looking at ways to make it more likely that future craft will completely burn up in the atmosphere. But it’ll take a while to implement new designs.

So far, only six people are known to have been hurt by falling debris. As both Earth’s surface and Earth orbit get more crowded, though, we could see more such incidents in the decades ahead. 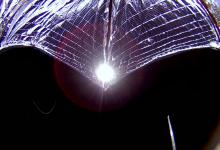