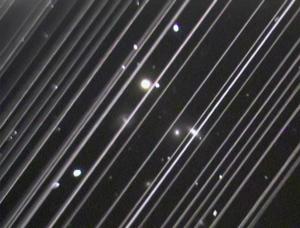 Starlink satellites, which provide Internet service to remote regions, streak across a galaxy cluster shortly after their launch in this May 2019 image from Lowell Observatory. The satellites are launched in groups, so they stick together for a few days as they move into their final orbits. Several hundred of the satellites have been launched, with many thousands more scheduled to join them in the next few years. Astronomers are concerned that the proliferation of these and other satellites will make it much more difficult to observe the night sky, both for scientists and for casual skywatchers. [Victoria Girgis/Lowell Observatory]

At the end of last year, a couple of thousand working satellites were orbiting Earth — watching the weather, tracking people and equipment, and studying the universe. Over the next few years, though, the number could increase by a factor of seven or eight. That could be good for business, but not so good for astronomy.

From the start of the Space Age, in late 1957, through last year, the world had launched about 9,000 satellites. Most of them have either stopped working or fallen back to Earth.

But two companies are ready to fill low Earth orbit with many more. SpaceX and OneWeb are launching thousands of small satellites into low orbits to provide high-speed internet service. OneWeb could launch a couple of thousand, while SpaceX has announced plans to launch up to 12,000.

For astronomy, though, that’s a problem. As the satellites pass across the sky at certain times of night, they reflect the Sun’s rays. So they create bright streaks of light on any pictures astronomers might be taking.

In February, the International Astronomical Union said it considers the satellites “worrisome.” The constellations of satellites, it said, “will have a negative impact on the progress of ground-based astronomy.”

SpaceX, which has already launched hundreds of satellites, is testing a new coating to make the craft darker. Even so, the view of the universe is likely to get a lot messier in the years ahead.