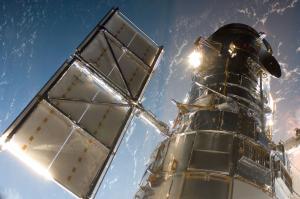 Hubble Space Telescope sits in the cargo bay of space shuttle Atlantis during the final Hubble servicing mission, in 2009. Hubble was launched in April 1990, and celebrates its 30th anniversary this year. [NASA]

LAUNCH CONTROL: 3, 2, 1, and liftoff of the space shuttle Discovery with the Hubble Space Telescope, our window on the universe.

And it’s still going today. Over the decades, it’s provided new insights into stars and galaxies, the age of the universe, and even the future of the universe. But it’s needed some help.

ENDEAVOUR: Endeavour has a firm handshake with Mr. Hubble’s Telescope.

Five crews of shuttle astronauts upgraded its instruments and repaired or replaced ailing systems — the last in 2009.

LAUNCH CONTROL: Liftoff of space shuttle Atlantis on the final visit to enhance the vision of Hubble.

A service call is unusual for missions of exploration, though. Engineers can send commands to overcome some problems, and they can upgrade the computer software, but major failures don’t get fixed.

Even so, several explorers have operated as long as Hubble has — or even longer.

The champions are Voyagers 1 and 2. They were launched in 1977 to explore the outer solar system. They’ve left the solar system behind — they’re studying interstellar space.

They’re losing power, so most of their instruments have been turned off. And they have occasional problems. Voyager 2, for example, went into “safe mode” in late January. It saw that something was wrong, then shut down and waited to hear from Earth. Engineers sent commands to get Voyager started again — keeping this aging explorer going for a little while longer.