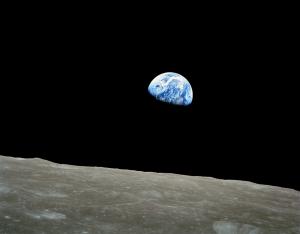 Views of Earth from space, especially this one taken by Apollo 8 astronauts from lunar orbit in December 1968, helped spur a new appreciation for the fragility of our home planet. Along with many environmental problems, that helped spur the creation of Earth Day, the first of which was celebrated 50 years ago, in 1970. [NASA]

Apollo 8 carried the first astronauts to the Moon, at the end of 1968. They orbited the Moon on Christmas Eve and Christmas Day. When they came home, they brought back a lot of close-ups of the lunar surface. But what really caught people’s attention were pictures of Earth — a blue-white marble rising above the stark lunar landscape.

By that time, many people were concerned about our home world. There’d been a series of environmental disasters during the 1960s. And no one seemed to be doing anything about the problem.

Inspired by those problems — and by the Space Age pictures of Earth — activists organized an event for April 22nd, 1970 — 50 years ago today. It became the first Earth Day.

Although the environmental movement was fairly new then, Earth Day was a big success. And it led to some big changes. The Environmental Protection Agency was formed that year. And laws protecting the air, water, and endangered species soon followed.

Earth Day has been celebrated every year since. And this year marks the event’s fiftieth anniversary. The theme is climate change — the problems caused by human activities.

Astronauts may return to the Moon within the next few years. And they’ll snap many more pictures of Earth. But it’s unlikely that any of them will have the same impact as those taken half a century ago — pictures of a “pale blue marble” in the blackness of space.

We’ll talk about everything beyond Earth tomorrow.