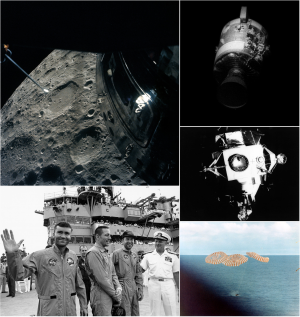 More than half way to the Moon, Apollo 13 was crippled by an explosion 50 years ago, forcing the astronauts and Mission to scramble to get the crew home safely. From top left: Apollo 13 slides behind the Moon to get a "slingshot" back to Earth; the damaged service module; the crew jettisons the lunar module, Aquarius, which served as a lifeboat for the trip back to Earth; splashdown; astronauts (l-r) Fred Haise, Jack Swigert, and Jim Lovell on the deck of the USS Iwo Jima. [NASA]

Perhaps no line in the history of the space program is better known than that one. Fifty years ago today, while more than halfway to the Moon, the crew of Apollo 13 — Jim Lovell, Fred Haise, and Jack Swigert — was in big trouble.

An oxygen tank had exploded, damaging other systems and shutting down the mothership’s fuel cells. Without them it had no power — and no way to keep the crew alive. Flight director Gene Kranz prepped his team in Mission Control for the challenge:

KRANZ: Okay, now, let’s everybody keep cool. We got the LM still attached, the LM spacecraft’s good, so if we need to get back home we’ve got a LM to do a good portion of it with. So let’s solve the problem, but let’s not make it any worse by guessing.

Within an hour of the explosion, the astronauts were prepping their lunar lander, Aquarius, to serve as a lifeboat. They fired its main engine to put them on a path that would take them behind the Moon, then straight back to Earth. Over the following three and a half days, they relied on its power and engines to keep them alive and on course. And they relied on hundreds of engineers and technicians on the ground to solve problems and work out procedures.

The astronauts were cold, thirsty, and miserable for much of the journey, but they made it home — surviving a famous problem in space.