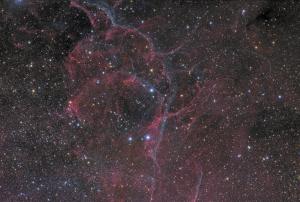 Clouds of gas and dust billow away from an exploded star, forming the Vela Supernova Remnant. It is about 800 light-years away and formed about 11,000 years ago as seen from Earth when a massive star exploded. As seen from Earth the remnant spans about 16 times the diameter of the Moon, but it is so faint that you need a telescope to see it. This image required a long exposure with a large telescope at the European Southern Observatory in Chile. [ESO/J. Pérez]

The Moon is the biggest single object in the night sky that’s visible to the eye alone. But many objects that are too faint to see are much bigger. An example is a nebula in the constellation Vela. It spans about 16 times the width of the Moon – almost the size of your fist held at arm’s length. And it’s getting bigger all the time.

The Vela Supernova Remnant is 800 light-years away. It was born about 11,000 years ago as seen from Earth, when a supergiant star exploded, blasting its outer layers into space.

As those layers ram into surrounding clouds of gas and dust, they glow. If you look across the entire spectrum – from radio waves to X-rays – the nebula looks like a mound of billowing clouds.

When the star exploded, the outer layers were expelled at up to a few percent of the speed of light. So over the millennia, the nebula has inflated to a diameter of more than a hundred light-years. And it’s still expanding – at more than two million miles per hour.

That rate is one way in which astronomers determine when the star exploded. Another is the star’s dead core, called a neutron star. It spins rapidly, emitting pulses of energy with each turn. Measuring how quickly it’s slowing down gives a rough estimate of when the neutron star formed – telling us when a massive star died.

The Vela Supernova Remnant is in Vela, the sails, which hugs the southern horizon at nightfall. The nebula is big but faint, so you need a good telescope to see it.