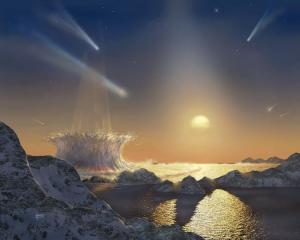 Comets and asteroids bombard the surface of a planet orbiting the star Tau Ceti in this artist's concept. The star is just 12 light-years away, and has four confirmed planets, including two in the habitable zone, the region that is most comfortable for life. But the planets are surrounded by a disk of large debris. Objects from the disk probably pound the surface frequently, producing global cataclysms that could prevent the formation of life or exterminate any that had taken hold. The first search for extraterrestrial intelligence, Project Ozma, scanned the system with a radio telescope 60 years ago, but heard nothing. [David Hardy/PPARC]

At least four planets orbit the star Tau Ceti, one of our closest neighbors. And two of those worlds are at the edges of the star’s habitable zone — the region that’s most comfortable for life. If civilizations inhabit those planets, though, they’re quiet. The first search for extraterrestrial intelligence scanned the planet, but didn’t hear a thing.

Tau Ceti is 12 light-years away — just down the block. The star is smaller and cooler than the Sun, and about half as bright. And it’s about a billion years older, so there’s been more time for life to take hold there.

But 60 years ago today, astronomer Frank Drake turned a radio telescope toward the system. It was one of two targets for Project Ozma — a hunt for other civilizations. In all, the telescope spent 200 hours scanning the two systems. But it found nothing out of the ordinary — ET wasn’t giving us a call.

Life in the system would face a big challenge. A disk of rocky debris surrounds the planets. It contains many times more material than the asteroid belt in our own solar system. Big rocks from the disk might fall inward, slamming into a planet. That could destroy life on the planet.

Project Ozma conducted only a short, narrow search for a specific sign of life at Tau Ceti. So despite the result, life could still exist on any or all of its planets. All we know for sure is that no one is beaming signals from Tau Ceti out into the galaxy.