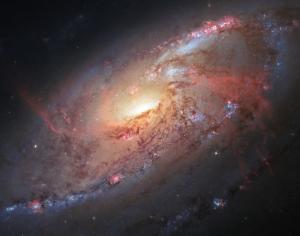 An extra set of spiral arms glows bright red in this composite image of Messier 106, a spiral galaxy in Canes Venatici, the hunting dogs. M106 is the largest of four bright galaxies visible in one quadrant of the constellation. A supermassive black hole sits at the center of the galaxy. Radiation from a disk of hot gas that encircles the black hole sets off a chain of events that produces the extra set of spiral arms (which look red because of their hydrogen gas), which wrap above the galaxy’s bright disk. This view consists of Hubble Space Telescope images combined with wider views from small ground-based telescopes. [NASA/ESA/Hubble Heritage Team (STScI/AURA)/R. Gendler]

Canes Venatici, the hunting dogs, is awash in beautiful galaxies. In fact, four of the most prominent galaxies in our night sky congregate in one quadrant of the constellation. All four of them are spiral galaxies, like our own Milky Way.

The most famous member of that quartet is M51, the Whirlpool Galaxy. It actually consists of two galaxies. One is a bright spiral that we see face on. It’s about half the diameter of the Milky Way. The second galaxy is much smaller — a yellow blob of stars. It’s flying past the bigger galaxy, pulling out a great ribbon of material — and triggering the birth of many new stars.

M94 is near Cor Caroli, the constellation’s brightest star. It, too, is a busy star factory. It’s giving birth to millions of new stars in a ring outside its core.

New stars are also taking shape in M63. Its arms aren’t sharp and well defined like those of the other galaxies, though. Instead, they look like strings of cotton balls.

M106 is the largest of the quadrant’s bright galaxies — wider than the Milky Way. A supermassive black hole sits at its heart. It’s encircled by a disk of hot gas. Radiation from the gas sets off a chain of events that produces an extra set of spiral arms, which wrap above the galaxy’s bright disk.

Canes Venatici is in the east-northeast as night falls, to the right and lower right of the Big Dipper. All four of its prominent galaxies are visible through small telescopes.