Until 1845, almost no one had seen the Sun as anything other than a bright disk in the daytime sky. A few astronomers had looked at it with special telescopes, or traced its projected image on a piece of paper. But that was about it. 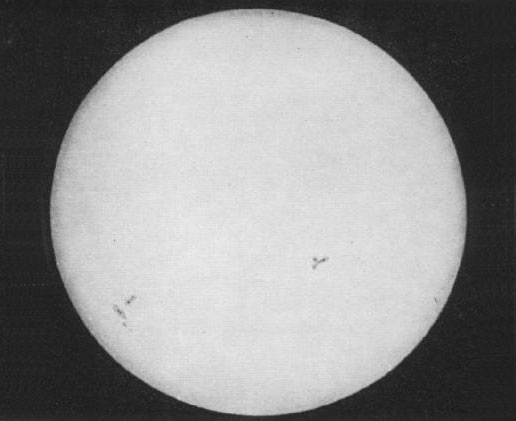 That changed 175 years ago today, when two French scientists snapped the first large photograph of the Sun. It was published in a book about astronomy, and later in other places — giving the world a close-up look at our star.

Armand Fizeau and Leon Foucault were young scientists fresh out of college. They were interested in the daguerreotype process — the first successful technique for taking photographs. It involved coating a copper plate with light-sensitive chemicals, exposing the plate, then using other chemicals to reveal the image.

Fizeau and Foucault refined the technique, then snapped a series of pictures of the Sun. Those images were tiny, though — the Sun was only about half an inch across — so they revealed almost no detail.

But on April 2nd of 1845, they took a much larger picture — the Sun measured about four and a half inches across. It showed two groups of sunspots, as well as some of the “bumpiness” on the Sun’s surface.

Fizeau and Foucault each spent a lot more time studying the Sun. And each of them used their observations to calculate the speed of light. They came up with numbers that were within a few percent of the true value — all from watching the Sun.