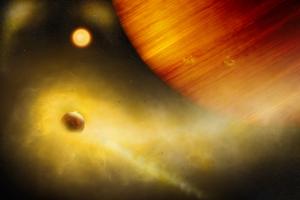 An artist's concept depicts a possible moon (lower left) orbiting the planet WASP-49b (right). The moon is hinted at in recent observations. If confirmed, it would be the first known exomoon. The moon and planet are so close to their parent star (top left) that the moon's outer layers are streaming away into space. [Thibault Roger/University of Bern]

A possible moon in a distant star system wouldn’t be a good place for an evening stroll. If astronomers are right, its surface is covered with molten rock, and giant volcanoes belch hot gas out into space.

The moon is in a system known as WASP-49, which is about 550 light-years away. The central star is about the same size, mass, and temperature as the Sun.

The star is orbited by a planet that’s as big as Jupiter, the giant of our own solar system, but only a third of Jupiter’s mass. It’s so puffed up in part because it’s quite close to the star — far closer than any of the planets in our own solar system.

Those details about the system are pretty well established. The moon, on the other hand, hasn’t been confirmed. Its existence is based on circumstantial evidence. That evidence includes a “doughnut” of sodium and potassium around the planet. A team of European researchers concluded that the material is too far out to come from the planet itself. Instead, they reported, it’s probably pumped into space by volcanoes on a hot moon.

Finding moons in other star systems is hard, though. Astronomers have discovered a couple of candidates, but not one has been confirmed. So it could take a while to confirm the presence of this possible moon.

Incidentally, the system is in Lepus, the hare, which is below the feet of Orion. WASP-49 is low in the southwest at nightfall. It’s far too faint, though, to see without a telescope.