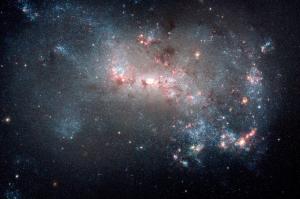 Thousands of young stars and brilliant stellar nurseries blaze in this Hubble Space Telescope view of NGC 4449, a small but busy galaxy about 12 million light-years away. Although it's only a fraction the size and mass of our home galaxy, the Milky Way, its rate of star formation is much greater. Hot, young stars in the galaxy, along with the exploding stars known as supernovae, produce a strong "wind" that blows into intergalactic space. Recent research, though, shows that the wind isn't as strong as expected. [NASA/ESA/A. Aloisi (STScI/ESA)/Hubble Heritage (STScI/AURA) ESA-Hubble Collaboration]

NGC 4449 is small but busy. The dwarf galaxy looks like it’s recently merged with a couple of other galaxies. It’s forming stars at a rapid pace — star for star, much faster than in our home galaxy, the Milky Way. And it’s blowing a “wind” of hydrogen and heavier elements into the space around it.

But the wind isn’t nearly as thick or as extensive as theory predicts. So the ideas about how such galaxies evolve, and how they interact with the rest of the universe, may need work.

NGC 4449 was one of a dozen dwarf galaxies targeted in a recent study, led by Kristen McQuinn of Rutgers and the University of Texas. Earlier work had shown that the galaxies were giving birth to many stars. The new study looked at how much gas the galaxies were blowing out into space.

Theory said they should be expelling a lot of it — the result of stellar explosions. It also predicted that the winds would contain a lot of material heavier than hydrogen and helium, the lightest elements.

But while most of the galaxies are pumping out some gas, it isn’t nearly as much as expected. Much of what they are expelling could fall back in. And the chemistry isn’t right, either.

So theorists have some work to do to explain the behavior of some of the smallest galaxies.

NGC 4449 is in the northeast as night falls, not far from the Big Dipper. The galaxy is about 12 million light-years away. And it’s so faint that you need a telescope to see it.

TODAY'S PROGRAM WAS MADE POSSIBLE BY THE NATIONAL SCIENCE FOUNDATION