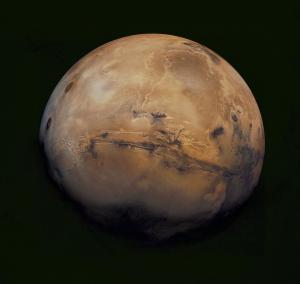 Valles Marineris, a network of canyons that dwarfs Earth's Grand Canyon, forms a deep slash across the center of Mars in this mosaic of images from the Viking 1 orbiter. The canyon stretches almost 3,000 miles, which is the length of the United States. It is miles deep and up to dozens of miles wide. It is named for the Mariner 9 spacecraft, which first photographed the feature in the 1970s. [NASA/JPL]

Mars is only half the diameter of Earth. Because it has no oceans, though, the planet has just as much land area as Earth does. That’s a lot of territory to explore — and perhaps to colonize.

And there’s a lot to see there — including some of the most dramatic features in the entire solar system.

One of those features is a network of canyons that dwarfs the Grand Canyon. It’s known as Valles Marineris — Mariner’s Valleys. It’s named for the Mariner 9 spacecraft, which studied the feature from orbit.

Valles Marineris is more than 2500 miles long — almost as long as the distance from Seattle to Miami. It’s up to four miles deep, and 125 miles wide — so wide that if you stood on one rim, you couldn’t see the other.

Mars also is home to the most impressive mountain in the solar system. Olympus Mons — Mount Olympus — is three times taller than Mount Everest. And its base covers an area bigger than New Mexico. It’s a volcano that’s been active within the last few million years — and might not be completely dead even today.

No spacecraft has yet visited either of these features — in part because the landscape is so rugged. But they’re important targets for science — and perhaps the site of adventures for future colonists.

Mars is one of two planets that huddles near the Moon at dawn tomorrow. Jupiter is the brighter of the two, with Mars just a whisker away. And a third planet, Saturn, is close to their lower left.