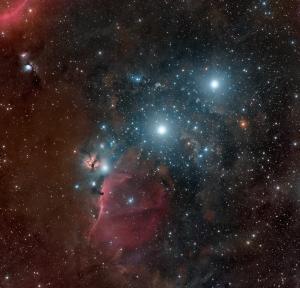 The brilliant stars Alnitak, Alnilam, and Mintaka (lower left to upper right) form Orion's Belt, one of the most prominent features in the night sky. All of the members of the belt are either current or future supergiants, which makes them among the biggest, brightest, and most massive stars in the galaxy. All are destined to end their lives with the titanic explosions known as supernovae. [Rogelio Bernal Andreo/Wikipedia]

Orion’s Belt is one of the best-known star patterns in the night sky — and one of the easiest to find. It’s a short line of three fairly bright stars. Right now, it’s in the south-southwest as night falls, with Orion’s other bright stars above and below it.

The star at the left end of the belt is Alnitak. The system includes two supergiants — among the biggest, brightest, and heaviest stars in the galaxy. The main star is more than 30 times the mass of the Sun, and 250,000 times brighter. The second star is less impressive, but still a monster.

Alnitak and Orion’s other bright stars were born from a huge complex of gas and dust. Deep images of the area around Alnitak reveal several clouds of this material — some of which is coalescing to make more stars.

In this scenario, there are four main groups. The first took shape to the north of Orion’s Belt. The stars of the belt are in the second group, so they’re all the same age — roughly six million to eight million years. And the youngest stars are below the belt.

The other idea says the stars were all born in the same region, but are streaming away from their birthplace. We’re looking down the streamer, with the youngest stars closest to us.

Either way, the stars of Orion’s Belt are young and vigorous — and we’ll have more about that tomorrow. 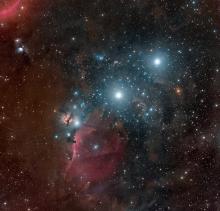 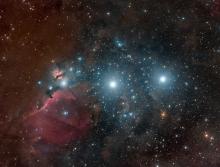