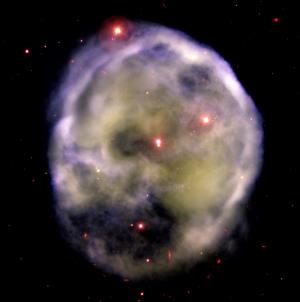 A trio of stars is sculpting a beautiful cloud of gas and dust in the constellation Cetus. The cloud consists of gas and dust expelled by a dying star over the last few thousand years. The orbital motions of at least one of its companion stars are helping shape the cloud, which is known as the Skull Nebula. Ultraviolet energy from the dying star's exposed core is causing the gas and dust to glow. The system is about 1,600 light-years away. [Gemini Observatory/Travis Rector/University of Alaska]

Stars can be artistic. They can sculpt fantastic figures: hourglasses, butterflies, owls, and many others. Sometimes, the figure is created by a single star. Other times, it’s a collaboration between two stars. And in at least one case, it’s three stars.

The trio has created NGC 246, the Skull Nebula. It’s about 1600 light-years away, in the constellation Cetus. As the sky darkens tonight, it’s just above the horizon, to the lower left of the line formed by the Moon and Venus, the “evening star.”

The raw material for the skull was supplied by one of the three stars. About 6600 years ago as seen from Earth, the star began expelling its outer layers into space.

Ultraviolet energy from the star’s now-dead core causes those layers to glow. The core is a bit less massive than the Sun. Models show that the star began life with more than four times the Sun’s mass. Its “normal” lifetime lasted only a quarter of a billion years.

As the star’s expelled outer layers expand, their shape is sculpted in part by its companions. One of them is fairly close, and is about the same mass as the donor star. Its gravity pushes the gas and dust around, helping form the “skull”-like appearance. The third star is small and a long way out, so its influence is small.

The nebula is continuing to expand — at 90,000 miles per hour. And the original star is completing its transition to the next phase in life — a small but hot corpse known as a white dwarf.