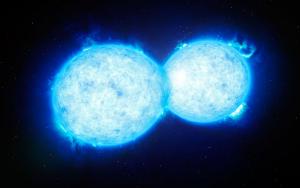 Two stars are especially close in this artist's concept of a contact binary star system. The stars are touching each other and exchanging the gas in their outer layers. Contact binaries may merge, producing an outburst known as a red nova. [ESO/L. Calçada]

A faint star near the boundary between Orion and Taurus could have a bright future. The system consists of two stars. They’re so close together that they’re actually touching. Over time, they could merge to form a single star. The merger would produce a brilliant outburst known as a red nova.

Similar fates may await many other star systems. Astronomers have discovered many “contact” binaries — systems where the stars are touching each other. Some of them are known as over-contact binaries. They’re not just touching — they’re sharing their outer layers of gas.

The system in Orion isn’t quite that far along. If we could see the system in profile, it would look a bit like a rounded bowling pin. The bigger, heavier, and brighter star forms the fat end of the pin, with the lesser star forming the neck. A streamer of gas connects them.

Because the stars are exchanging some of their gas, they’re moving closer together. As that process accelerates, they could merge with a brilliant flash — something that’s been seen before.

An especially heavy contact binary in another galaxy could be on the path to a merger as well. If the stars do merge, they might produce a gamma-ray burst — one of the brightest events in the entire universe. But contact binaries don’t always merge. If the two monster stars stay apart, both of them might collapse to form black holes. And in the far-distant future, they might merge — final contact for two giant stars.