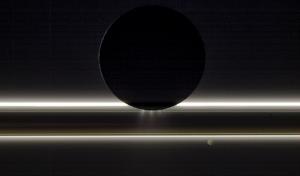 Geysers of water and ice spew into space from the south pole of Enceladus, one of the moons of Saturn, as it passes in front of the planet's rings in this view from the Cassini spacecraft. The smaller moon Pandora is just below the rings. The surface of Enceladus consists almost entirely of water ice. An ocean of liquid water appears to lie below the surface. Some of the water squirts through cracks in the icy crust. Cassini detected organic chemistry in the water plumes, suggesting the ocean may be fed by volcanic vents like those found at the bottom of Earth's oceans. That gives Enceladus the basic ingredients for life: water, chemistry, and energy. [NASA/JPL/SSI]

We haven’t seen life anywhere in the solar system besides Earth. Yet several worlds seem to have the potential for life. The list includes Mars, Jupiter’s moon Europa, and even Pluto.

Another one is Enceladus, a moon of Saturn. It has most of the ingredients for life — including some of the chemistry of life.

Enceladus is coated with almost pure ice, so it looks almost pure white. Below the surface, though, it’s quite complicated. An ocean of liquid water lies below its crust. And volcanic vents at the bottom of the ocean belch hot water that contains a lot of minerals. That gives Enceladus the main ingredients for life: water, heat, and chemistry.

And the chemistry keeps getting more favorable. Scientists are still analyzing observations from the Cassini spacecraft, which orbited Saturn for more than a decade. It flew through plumes of water from Enceladus that shoot out through cracks in its crust.

The analysis has revealed organic compounds attached to grains of ice. And a few months ago, the list was expanded to include key ingredients in amino acids — some of the basic building blocks of life.

None of that means that anything is living in the ocean. But the discoveries do show that we can’t rule out the possibility of life on this bright, icy moon.

Its parent planet, Saturn, is quite low in the southeast at first light. Tomorrow, it stands near the crescent Moon. The planets Jupiter and Mars line up to their upper right.