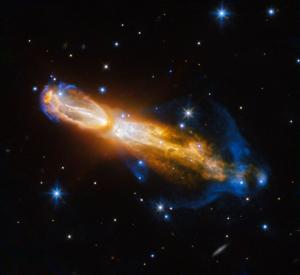 A star about 5,000 light-years from Earth is expelling its outer layers into space in this Hubble Space Telescope image. The expelled gas, which is moving at one million miles per hour, is shown in yellow. The blue shows where the gas is ramming into gas around the star, creating shockwaves. The complex, which spans about 1.4 light-years, is known as the Rotten Egg Nebula because it contains a lot of sulfur. It began forming about 800 years ago (as seen from Earth) when the star first began blowing its outer layers into space. [ESA-Hubble/NASA]

A beautiful feature of the constellation Puppis is giving astronomers a rare treat — a chance to watch the final years of a dying star.

The star is at the center of a cloud of gas and dust. The cloud contains a lot of sulfur, so it’s known as the Rotten Egg Nebula.

In pictures from Hubble Space Telescope, it looks like a squid that’s trying to escape from danger. Its arms and tentacles are folded behind it, and a cloud of “ink” squirts from its base.

The nebula is produced by a red giant — a star that’s old and bloated. The nuclear reactions in its core are beginning to shut down. As that happens, the star is blowing its outer layers into space. They race outward in opposite directions at close to a million miles per hour. That forms “jets” that span more than a light-year — the body and arms of the squid.

The jets ram into gas and dust around the star. They slow down and spread out, forming the squid’s ink.

This phase of a star’s life doesn’t last long, so astronomers don’t get much chance to study it. In a thousand years or so, in fact, the star will have shed all of its outer layers. That’ll create an even more impressive cloud — a planetary nebula. It’ll glow for thousands of years, illuminated by the star’s hot but dead core — a white dwarf.

The Rotten Egg Nebula is near the northern border of Puppis. On February evenings, the nebula stands to the left of Sirius, the brightest star in the night sky.