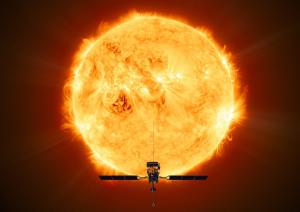 A mission scheduled for launch in early February will catch a unique view of the Sun. Solar Orbiter, shown in an artist's concept, is a European mission that will view the Sun's poles, which are impossible to see from Earth. That will help it determine the origin of the solar wind, a flow of charged particles from the Sun that blows throughout the solar system. [ESA]

When the Mariner 2 spacecraft was headed toward Venus, in 1962, it made the first measurements of a high-speed “wind” of charged particles from the Sun. And scientists have been trying to understand that wind ever since.

They should get some new clues from a spacecraft whose launch window opens tomorrow.

Solar Orbiter is a European mission. When it reaches its target orbit, in about three years, it’ll be able to view the Sun’s poles — something that’s impossible to do from Earth. Combined with other observations, that’ll provide the most complete view of the entire Sun to date.

The solar wind blows at a million miles per hour or faster. It clears out a magnetic “bubble” around the solar system called the heliosphere. It extends far beyond the orbit of Neptune, the most remote of the Sun’s major planets.

Astronomers are still unsure how the Sun drives the solar wind. They know it involves the Sun’s magnetic field, which goes through an 11-year cycle. The Sun gets more active at a cycle's peak. It produces more dark sunspots, as well as powerful outbursts. The outbursts can mess with technology here on Earth, so it’s especially important to understand how they work; more about that tomorrow.

At its closest, Solar Orbiter will pass about 25 million miles from the Sun. Only one other spacecraft has gotten closer. That approach will take the craft close to the region where the solar wind takes shape — helping scientists understand its creation.