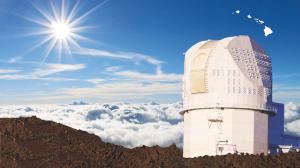 New Eye on the Sun

The Sun shines on the Daniel K. Inouye Solar Telescope atop Haleakala, a 10,000-foot mountain in Hawaii. The world's largest Sun-watching telescope, it is being commissioned this year. [National Solar Observatory]

The Sun is a giant presence in our sky. So you might think that astronomers don’t need big telescopes to study it. You would be wrong. To learn the details about how the Sun works, astronomers need to see the details on its surface. The bigger the telescope, the more detail.

The world’s largest Sun-watching telescope is scheduled to begin science operations this year. The Daniel K. Inouye Solar Telescope is named for a former U.S. senator from Hawaii. It’s atop Haleakala, a 10,000-foot mountain on Maui. Appropriately enough, Haleakala means “house of the Sun.”

The telescope's main mirror is more than 13 feet in diameter. The telescope will use a technique known as adaptive optics to eliminate the blurring effect of Earth’s atmosphere. The combination will show details that are less than 15 miles across.

Scientists will study what’s happening on the Sun now, and what happens over a period of years.

The Sun goes through an 11-year magnetic cycle. And no two cycles are alike. So long-term studies will tell us more about what’s happening inside the Sun over many decades — studies made with a giant telescope atop the house of the Sun.