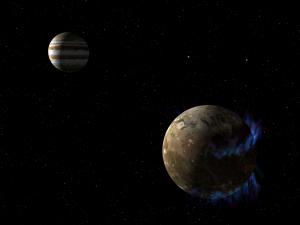 Jupiter's largest moon, Ganymede, orbits the giant planet in this artist's concept. Ganymede generates its own magnetic field, which produces weak auroral displays similar to the northern lights here on Earth. The magnetic field may be generated by the motions of a salty ocean below Ganymede's icy surface. The magnetic field interacts with Jupiter's to enhance Jupiter's own aurorae. [NASA/ESA]

Ganymede, the largest moon of Jupiter, has a lot going for it. It’s the largest moon in the entire solar system — bigger than the planet Mercury. It probably has an ocean of liquid water far below its icy surface. And it’s the only moon that generates its own magnetic field.

Ganymede is about half again the diameter of our own moon. But its composition is quite different. It has an iron core, surrounded by a thick layer of rock, topped by a crust made of ice. The crust is hundreds of miles thick.

Ganymede’s ocean may lie between layers of that crust. And it may hold more liquid water than all of Earth\'s oceans combined.

The ocean probably is “salty” — it contains a lot of dissolved minerals. As Ganymede spins on its axis, the motions of the salty water contribute to the big moon’s magnetic field. The field is strong enough to produce auroras — like the curtains of color known as the northern lights here on Earth.

The magnetic field interacts with Jupiter’s field, which is much stronger. That interaction may contribute to Jupiter’s auroras as well — one more feature that makes Ganymede one of the more interesting worlds in the solar system.

Jupiter is just moving into view in the morning sky now. Tomorrow, look for it to the lower left of the crescent Moon in early twilight. It’ll climb higher over the coming weeks, making it even easier to see. And with binoculars, you’ll also be able to see its four biggest moons — including Ganymede.