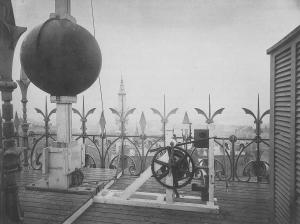 The metallic ball in this image helped the entire city of Boston keep time. It was dropped from the top of a tall mast atop the city's Equitable Building every day at noon. Observers across the city used the signal to set their own clocks and watches. Ship's navigators used the signal to set their on-board chronometers, which allowed them to accurately plot their longitude. This image is from 1881. Time balls remained popular in many cities across the world until time began to be transmitted by radio in the early 1900s. Today, the best-known time ball is dropped in New York City's Times Square at midnight on New Year's Eve, marking the start of the new year. [Wikipedia/U.S. War Department]

Observatories of the 19th century didn’t receive government funding. They relied mainly on private donors, although they sometimes had to get creative to pay the bills. The Cincinnati Observatory, for example, sold time — for a thousand dollars a year.

The observatory was one of many that operated a time ball. The ball was placed on a pole atop the dome. The ball was dropped at precisely noon — allowing businesses and individuals to synchronize their clocks.

Observatories provided the service because they had special instruments that allowed them to calculate the precise time of local noon — the moment the Sun was highest in the sky. That made them perfect timekeepers.

Time balls were first used in England. Ship’s navigators needed to know the time to plot their longitude — their east-west position on the globe. To do that, though, they had to have a reference point — a point where they knew the exact longitude and the correct time.

So a young officer in the royal navy suggested a time ball. The ball would be dropped from a high point at a specific time. Navigators aboard ship could observe the drop by telescope, and use the time to set their chronometers.

The first time ball was in Portsmouth, in 1829. An additional time ball was set up atop the Royal Observatory at Greenwich in 1833. The ball was dropped at precisely 1 p.m. And it still operates today — keeping time for all to see.