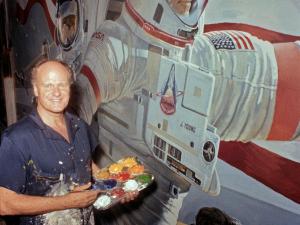 Space artist Robert McCall takes a break from painting a mural at Johnson Space Center in Houston in this NASA image. McCall, who was born December 23, 1919, was an illustrator for Life and other magazines. He was given full access to the early American space program, and painted images of astronauts, rocket launches, and other scenes. He created several mission patches for NASA space flights, painted images for stamps, created many public murals, and devised concept art for "2001: A Space Odyssey" and other movies. [NASA]

Robert McCall was not only inspired by spaceflight, he helped inspire others to achieve it. He produced magazine illustrations, murals, postage stamps, and other artwork about space, both real and imagined.

McCall was born 100 years ago today, in Columbus, Ohio. During World War II he wanted to be a pilot. But he was colorblind, so the Army made him a bombardier instead.

After the war, he produced artwork for several magazines. And in the early 1960s, he illustrated articles on the space program for Life magazine. That led to an invitation from NASA to join its art program. He was given inside access to the early space missions.

McCall produced murals for the National Air and Space Museum, Johnson Space Center, and others. He designed crew patches for the final flight to the Moon and other NASA missions. And he did a score of stamps with space themes.

McCall also worked on films. He created promotional artwork for “2001: A Space Odyssey,” and concept art for “The Black Hole” and the first Star Trek movie.

McCall died in 2010. But his work is in view in museums, art galleries, web sites, and elsewhere — perhaps inspiring future scientists and engineers to reach for the stars.