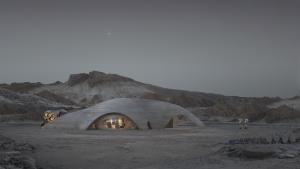 An astronaut relaxes inside a Mars habitat in this concept developed as part of a NASA competition. The 3D-printed habitat would feature several modules housed beneath a shield made of Mars dirt and rock. This and several other habitat concepts are on display at an exhibition in London. [Hassell/EOC]

It’s likely to be many years before people land on Mars — and decades before they begin to settle there. Yet engineers and artists are already pondering what living on the Red Planet might be like. They’ve come up with ideas for habitats, rovers, space suits, and many other components of everyday life.

Many of those ideas have come together in “Moving to Mars,” an exhibition in London. It includes concepts developed for NASA and the European Space Agency as they plan early human missions.

As part of a NASA competition, one design firm came up with a concept for a habitat that makes use of Martian dirt. Robotic machines would land on Mars and use the dirt to construct a shield against radiation from the Sun. Later, modules shipped from Earth would be inflated below the shield. The modules would include living quarters, labs, and workshops.

Other designers have looked at ways to reduce the amount of material that has to be shipped from Earth, such as making clothing from used parachutes.

By the time anyone heads toward Mars, of course, technology will have changed. So few of today’s designs are likely to be selected for the trip. Yet they may spur more ideas as we get closer to the first journeys — making it possible to live on Mars.

And Mars is in good view the next couple of mornings. It looks like a modest orange star, low in the southeast at first light. It stands below the Moon tomorrow, and to the upper right of the Moon on Monday.