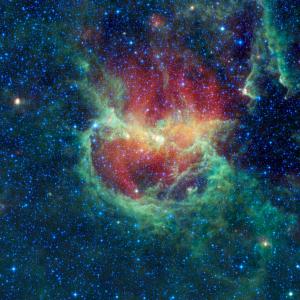 An infrared view shows clouds of gas that form the Lambda Centauri Nebula, a stellar nursery about 5,800 light-years from Earth. The red indicates the glow of gas and dust, while green shows the light from stars. The image was compiled by WISE, a spacecraft launched in 2019. The mission has been redesignated NeoWISE, and it hunts for asteroids and comets in our own solar system. [NASA/JPL-Caltech/UCLA]

Exactly 10 years after its launch, a small space telescope has discovered stars and galaxies galore — not to mention asteroids, star clusters, and many other intriguing objects.

WISE — the Wide-field Infrared Survey Explorer — was designed to look at the sky in wavelengths that are blocked by Earth’s atmosphere. Those wavelengths reveal details about how stars are born, how galaxies evolve and merge, and much more. And they reveal especially cool objects such as asteroids and the “failed stars” known as brown dwarfs.

By the end of its first year in orbit, WISE had scanned the entire sky twice. It cataloged about 750 million infrared objects. By then, it had used up the ice that kept its instruments cold. So the spacecraft was placed in hibernation.

Some of its instruments could still work without being super-cold. So WISE was revived to pursue a new mission: hunting and tracking N-E-Os — Near-Earth Objects. These are asteroids and comets that come close to Earth’s orbit, making them potential threats to our planet.

That mission — known as NEO-WISE — continues today. So far, it’s yielded more than a hundred new NEOs. And it’s produced images of hundreds of previously known ones. The images help reveal the sizes of these objects — details that tell us how much of a threat these space rocks might present. 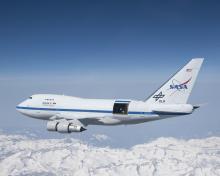