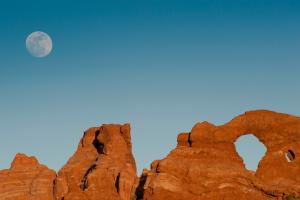 An almost-full Moon rises behind Turret Arch, in Arches National Park, Utah. December's full Moon, on the night of the 11th, is known as the Long-Night Moon because it remains in the sky longer than any other full Moon of the year. [Neal Herbert/National Park Service]

December’s full Moon is known by several names. One is the Cold Moon, while another is the Moon Before Yule — good descriptors of the time of year. And it has another name that’s every bit as obvious — but only when you think about it: the Long-Night Moon. It tells us that the Moon is in view for a longer period than any other full Moon of the entire year.

The moniker becomes obvious when you consider the full Moon is a mirror image of the Sun — offset by six months. So whatever the Sun does today, the Moon will copy six months later.

Around the time of the summer solstice, for example, the Sun is in view longer than at any other time of year. It climbs highest across the sky as well, and rises and sets farthest north. At that time, the full Moon is puny by comparison. Since it rises around sunset and sets around sunrise, it’s not in view for long. And it stays fairly low in the sky.

Now, though, less than two weeks before the winter solstice, it’s just the opposite. The Sun is in view for fewer hours, and it stays low in the sky. But the full Moon shines at its best. It rises early, sets late, and climbs highest across the sky.