Sometime in the last million years, Tabby’s Star may have swallowed a planet. One of the planet’s moons survived the encounter, though, entering its own orbit around the star. But the star’s heat is causing the moon to evaporate. That’s leaving a trail of dust around the star. As seen from Earth, clumps of the dust pass in front of the star, periodically causing it to fade.

That’s the scenario presented by a team of astronomers earlier this year. The team was trying to explain the star’s unusual flickering. At times, its light can drop by anywhere from about one percent to more than 20 percent. But there’s no pattern to the drops. That means they can’t be caused by the passage of a planet in front of the star — such passages would follow a regular pattern.

Astronomers have proposed several mechanisms to explain the flickering. They range from swarms of comets to structures built by an alien civilization.

The latest idea doesn’t settle the matter. But several other discoveries may.

One astronomer, for example, found a score of stars that fade and brighten erratically, just as Tabby’s Star does. The stars are of two main types, suggesting there’s a common cause for their flickering. Studies of the entire group could help astronomers find that cause.

Another study found a star whose light faded by 80 percent for about a day. That star may have been eclipsed by a planet with giant rings — just one of the many possible ways to make a star flicker. 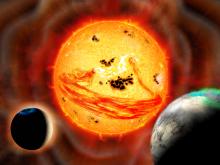