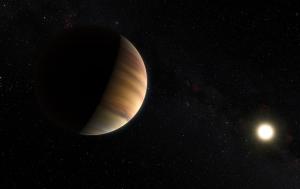 The discovery of 51 Pegasi b, a planet orbiting a star in the constellation Pegasus (at left in this artist's concept), opened an astronomical gold rush. Astronomers began hunting for additional exoplanets in a big way. Their efforts have led to the discovery of more than 4,000 confirmed exoplanets and thousands more candidate worlds. 51 Pegasi was the first confirmed planet orbiting a star that is similar to the Sun. Astronomers Michel Mayor and Didier Queloz, who discovered 51 Pegasi, earned a share of this year's Nobel Prize in Physics for the find. [ESO/M. Kornmesser/Nick Risinger (skysurvey.org)]

Michel Mayor and Didier Queloz were studying 51 Pegasi. The star is a little bigger and heavier than the Sun, but the same color. The astronomers discovered a small back-and-forth shift in the star’s spectrum — its individual wavelengths of light. They determined that the shift was caused by the tug of an orbiting planet.

The planet is about half as massive as Jupiter, the giant of our own solar system. Because of that, it’s been given the formal name Dimidium — Latin for “half.” But it’s only a few million miles from 51 Peg, so it’s extremely hot. It became the first of an entire class of planets, known as hot Jupiters. Such planets were completely unexpected, so it took astronomers a while to accept them. And they’re still trying to explain how such planets exist.

The discovery opened a busy new field: planet hunting. It’s yielded more than 4,000 confirmed worlds. And it earned the discoverers a share of this year’s Nobel Prize in Physics.

Under especially dark skies, 51 Peg is just visible to the unaided eye. Pegasus is high in the south at nightfall this month — the home of a prize-winning planet.