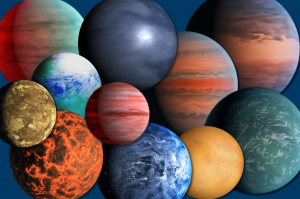 Astronomers have discovered thousands of planets in star systems other than our own, some of which are depicted in this collage of artist concepts. Yet determining which planet was first isn't straightforward. There are several possibilities. A pair of astronomers will share the 2019 Nobel Prize in Physics for the discovery of one of those planets.

Gamma Cephei has a couple of distinctions. For one thing, it’s a future North Star. A thousand years from now, it’ll be closer to the north celestial pole than Polaris, the current North Star. In fact, you can find it standing directly above Polaris at nightfall at this time of year.

Another distinction is that it hosts the first confirmed planet beyond our own solar system. Unfortunately for the discoverers, though, it took decades to confirm it.

Astronomers have logged more than 4,000 exoplanets. Just who gets credit for the first one is blurry. But two astronomers will share part of this year’s Nobel Prize in Physics for the 1995 discovery of a planet in the star system 51 Pegasi.

The planet around Gamma Ceph was reported in 1988, by Gordon Walker and Bruce Campbell. They calculated that it was about twice the mass of Jupiter, the giant of our own solar system, and orbited the star once every two and a half years. But others convinced them they were actually seeing pulsations in the star itself. The planet was confirmed many years later.

In 1989, David Latham reported a possible planet around another star. But it could have been a “failed star,” known as a brown dwarf. It was confirmed as a planet a few years ago.

And in 1992, another team reported the discovery of two planets orbiting a dead star known as a pulsar. The finding was controversial, although it’s been confirmed. More about that tomorrow.