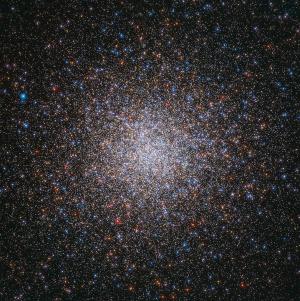 About 150,000 stars squeeze together in Messier 2, a globular star cluster photographed by Hubble Space Telescope. The cluster formed when the universe was less than one billion years old, so its stars are among the oldest in the Milky Way Galaxy. The cluster belongs to a region of space nicknamed the Gaia Sausage. It's named for the Gaia space telescope, which has mapped the area, and the region's shape, which resembles a sausage. Several other clusters inhabit the region, suggesting they had a common origin. [ESA-Hubble/NASA/G. Piotto et al.]

The Gaia Sausage isn’t made with oregano or garlic or pepper flakes. Yet it’s plenty spicy. It appears to be a streamer of stars captured by the Milky Way billions of years ago. And it includes some of the biggest and oldest star clusters in the entire galaxy.

One of those clusters is Messier 2. It’s in Aquarius, and is in the southwest at nightfall. Through binoculars, the cluster looks like a small, fuzzy patch of light.

There’s nothing small about the cluster, though. It contains 150,000 stars, packed into a ball about 175 light-years in diameter. That makes it a globular cluster. And its stars are ancient: about 13 billion years old. That means they formed when the universe was less than a billion years old.

M2 has a lot in common with at least seven other globulars in the Milky Way. The clusters are spread through a region of space that’s shaped like a sausage. It’s named for the Gaia space telescope, which has mapped the region.

The eight clusters — and possibly two others — follow similar orbits through the galaxy. They’re the same age, and their stars have about the same composition — indications that the clusters had a common origin.

They may have formed in another galaxy. The galaxy rammed into the Milky Way at least eight billion years ago. Because the Milky Way was bigger, it absorbed the other galaxy — including its globular clusters. The clusters are now long-time residents of the Milky Way — and the Gaia Sausage.