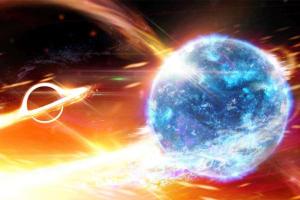 A black hole (surrounded by a disk of hot gas, left) begins to swallow a neutron star in this artist's concept. Astronomers detected the "jiggle" of spacetime caused by such a merger in August. [Carl Knox/OxGrav ARC Centre of Excellence]

In the afternoon of August 14th, detectors felt the universe “jiggle” in a way they hadn’t seen before — the possible result of a black hole swallowing a neutron star in a single gulp.

The “jiggles” were gravitational waves — ripples in space and time produced by the motions of extremely dense bodies. They were detected by observatories in the United States and Europe known as LIGO and VIRGO.

These observatories had already seen mergers between pairs of black holes, and pairs of neutron stars. They’d even seen one possible merger involving one of each, but the signal was too weak to confirm.

The signal in August was much stronger. Analysis showed that it was the result of a merger of an object more than five times the mass of the Sun with another less than three times the Sun’s mass. The heavier object has to be a black hole, while the lighter one is most likely a neutron star — the ultra-dense corpse of a once-mighty star. The merger took place almost 900 million light-years from Earth.

Astronomers quickly scanned the region of the sky where the gravitational waves came from at many wavelengths. They were looking for additional evidence of the merger — a flash of light as the neutron star was being pulled apart, for example. But they didn’t see a thing. That suggests the black hole may have swallowed the neutron star in a single gulp — leaving no evidence of this heavyweight merger.

Tomorrow: a bright trio in the evening sky.