One of nature’s most unforgettable light shows is the aurora — ribbons and curtains of color in the night sky. But the auroras on Jupiter, the Sun’s largest planet, are a thousand times more powerful — and much more complicated.

On Earth, an aurora forms when charged particles from the Sun bombard our planet’s magnetic field. The field funnels particles toward the surface. They zap atoms and molecules in the upper atmosphere, causing them to glow.

Many of those particles come from Io, the closest of Jupiter’s four big moons. Volcanoes on Io blast gas and dust into space. Jupiter’s magnetic field gives the particles an electric charge, then guides them into the atmosphere near the poles. That keeps Jupiter’s auroras going all the time.

The auroras are also affected by the other moons. As they sweep through the magnetic particles around Jupiter, the moons push some of the particles toward the planet.

The biggest moon, Ganymede, produces its own magnetic field. That interacts with Jupiter’s magnetic field to funnel even more particles toward the surface — adding to the Jovian light show.

And Jupiter is teaming up with the planet Venus in the evening sky. Venus is the “evening star.” Fainter Jupiter is quite close to it for the next few nights.

We’ll have more about auroras tomorrow. 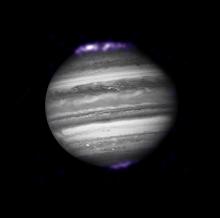