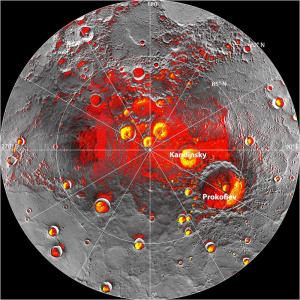 This image combines observations from ground-based radio telescopes and the MESSENGER spacecraft to depict possible locations of ice deposits near the north pole of the planet Mercury. Red, from MESSENGER, shows regions that are in perpetual shadow, so they are especially cold. Yellow, from ground-based radio telescopes, shows possible exposed ice deposits. The Moon may have similar ice deposits near its poles. [NASA/JHUAPL/CIW/NAIC/Arecibo]

Mars, Mercury, and the Moon have more in common than just the letter M. All three are small, rocky worlds. They all have large deposits of ice at their poles. And for the next couple of days, they clump together in the dawn sky.

The Moon is the smallest member of the trio — about 2200 miles in diameter. Mars is twice that size, with Mercury half way between the two.

All three are balls of rock and metal. Mercury has a big, heavy core of iron and nickel. That makes it the second-densest planet in the solar system, behind Earth. The Moon has a metallic core as well. It’s not nearly as big in proportion to the Moon’s overall size, though, so the Moon is much less dense. The Martian core isn’t well understood. But a lander is probing the planet’s interior by listening for “marsquakes.” That should give us a better idea of how Mars is put together.

Orbiting spacecraft and ground-based radio telescopes have found evidence of big deposits of ice at the poles of Mercury and the Moon. They’re hidden inside craters that never see the light of day.

You don’t have to look hard to find the ice on Mars, though. The planet has giant ice caps at both poles — some of the most prominent features on the Red Planet.

Look for the Moon, Mars, and Mercury before and during dawn’s early light the next couple of days. Mars will stand close to the right of the Moon tomorrow, with Mercury farther below the Moon. The Moon will perch below Mercury on Monday morning.