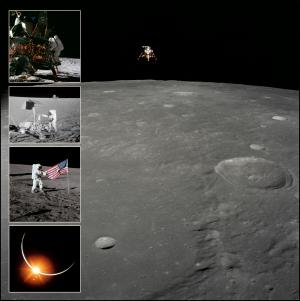 Intrepid, the Apollo 12 lunar module, prepares to descend to the Moon after separating from the command module on November 18, 1969. Astronauts Pete Conrad and Alan Bean made the second manned lunar landing, on the Ocean of Storms. Insets, from top: Bean leaves Intrepid for the first of two moonwalks; Conrad poses beside Surveyor 3, a robotic probe that landed on the Moon in 1967 (Surveyor was the target for Apollo 12's landing); Conrad with the American flag; Earth eclipses the Sun as Conrad, Bean, and Richard Gordon return to Earth. [NASA (5)]

PETE CONRAD: There it is! Son-of-a-gun! Right down the middle of the road! ALAN BEAN: Outstanding, Pete. CONRAD: I can’t believe it! Amazing! Fantastic!

Pete Conrad and Alan Bean had reason to be excited. 50 years ago today, the Apollo 12 astronauts were moments away from making the second manned lunar landing. And Conrad had just spotted their target: a small crater holding Surveyor 3, a robotic lander that had touched down more than two years earlier.

Future Apollo missions would be focused more on science, requiring pinpoint landings at interesting sites. So Apollo 12 was testing the ability to hit a precise target. And Conrad, flying the Lunar Module Intrepid, did just that.

A few hours later, Conrad stepped on the lunar surface for the first of two moonwalks.

The astronauts set up experiments and gathered samples of rock and dirt.

CONRAD: We’re just going to more to the area where we can stop and case the joint. Al, grab a shot of that beaded glass there and we’ll bag it. BEAN: Okay. CONRAD: That’s better than the Hope Diamond.

Then they walked down to the Surveyor, just 500 feet away.

Conrad and Bean clipped off some parts for engineers on Earth to study. Hours later, they blasted off to rejoin crewmate Richard Gordon for the trip home — ending a precise mission to the Moon.