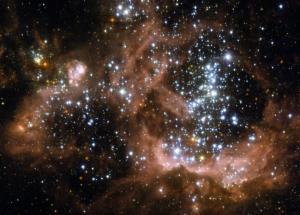 Thousands of new stars have taken shape in NGC 604, a busy star factory in M33, the Triangulum Galaxy, one of our closest galactic neighbors. NGC 604 is a massive cloud of hydrogen gas and other materials that continues to give birth to stars. The hottest and most massive stars erode and compress the remaining gas and dust, shutting down star formation in some areas while enhancing it in others. M33 is about 2.7 million light-years away. [NASA/ESA-Hubble]

Our home galaxy, the Milky Way, belongs to the Local Group — a small cluster of dozens of galaxies. It contains two heavyweights — the Milky Way and the Andromeda Galaxy. It also has a few middleweights, and a whole bunch of bantamweights — tiny puffs of stars and gas.

But there’s only one that might be called a light heavyweight: M33. It’s in the tiny constellation Triangulum, so it’s also known as the Triangulum Galaxy.

Like the Milky Way and Andromeda, M33 is a spiral galaxy. It consists of a flat disk of stars. Its younger, hotter stars outline beautiful spiral arms.

M33 isn’t nearly as monstrous as the Local Group’s heavyweights, though. It’s about half the diameter of the Milky Way. And it probably has only about a tenth as many stars.

It does outperform both of the bigger galaxies in one category, though: star production. Given its size, it’s churning out far more new stars.

Many of them are being born in a single stellar nursery, NGC 604. It’s one of the most impressive star-forming regions in the entire Local Group. It’s given birth to thousands of stars, including a couple of hundred that are dozens of times the mass of the Sun.

Under especially clear, dark skies, M33 is just visible to the unaided eye. In fact, it’s one of the most-distant objects visible to the eye alone — close to three million light-years away. As night falls, it’s above Triangulum’s triangle of stars — a galaxy that’s in a class of its own.