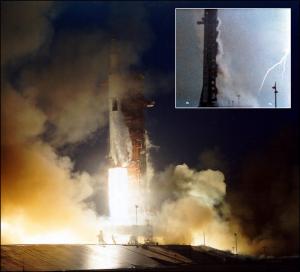 Apollo 12 launched into heavy clouds and rain on November 14, 1969. Seconds after liftoff, lightning hit the Saturn V booster rocket and continued down toward its launch pad (inset). The strike knocked many of the craft's systems offline, including the telemetry feed to mission control. A flight controller saved the launch by recommending that the astronauts flip an obscure switch on their control panel. That allowed astronauts Pete Conrad, Alan Bean, and Richard Gordon to continue their trip to the Moon. [NASA (2)]

Astronauts Pete Conrad, Alan Bean, and Richard Gordon were ready to head to the Moon. Rain and heavy clouds hung over their launch pad, but engineers decided they wouldn’t be a problem. So Apollo 12 headed skyward 50 years ago today.

Seconds later, though, something went wrong.

APOLLO 12: What the hell was that? I lost a whole bunch of stuff.

Mission Control lost data, and the systems in the spacecraft went haywire.

APOLLO 12: Okay, we just lost the platform gang. I don’t know what happened, we had everything in the world drop out. ...Fuel cell lights, an A/C bus light, a fuel cell disconnect, A/C bus overload 1 and 2, main bus A and B out.

Without guidance and power, the crew might have had to abort. But 26-year-old flight controller John Aaron saved the day by recommending that the crew flip a little-known switch.

That reset the power, allowing the flight to continue. A bit later, Pete Conrad deduced what had happened:

CONRAD: We’re okay now. We’ve straightened out our problems here. I don’t know what happened. I’m not sure we didn’t get hit by lightning.

Lightning had indeed zapped the craft. But quick work by Mission Control and the astronauts overcame the problem — allowing Apollo 12 to make the second landing on the Moon. More about that next week.