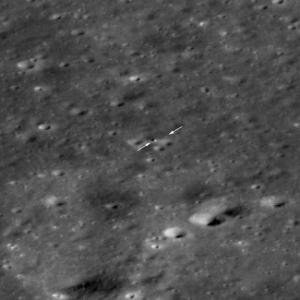 Arrows point to the most recent lunar lander, China's Chang'e-4, and Yutu, a small rover it deployed on the far side of the Moon, in this image from Lunar Reconnaissance Orbiter. Several new lunar missions are scheduled for launch in the next few years. Despite decades of lunar missions, landing on the Moon still isn't easy, as the recent failure of India's Vikram lander demonstrated. [NASA]

Landing on the Moon is hard. Early this year, for example, an Israeli lander failed during final descent. And two months ago, a lander and rover launched by India failed just seconds from touchdown.

Since 1972, there have been only four successful landings on the Moon. The most recent came last December, when China dropped a lander and a rover on the lunar farside.

In large part, that’s because of a lack of interest. But the lack of missions is also because even today, landing on the Moon isn’t easy.

And it never has been. Even Apollo, which landed six teams of astronauts on the Moon, had problems. Apollo 11, which made the first landing, had to overcome a lot of glitches as it dropped toward the surface. Apollo 13 had to abort on the way to the Moon. And the mission between them, Apollo 12, almost didn’t even make it to Earth orbit. More about that tomorrow.

Yet interest in the Moon is running high. More than a half-dozen landers are set to head for the Moon in the next two or three years. The first is scheduled for launch as early as December — a Chinese mission that will pick up samples and return them to Earth.

In the meantime, look for the just-past-full Moon tonight. It has a close, bright companion: the star Aldebaran — the eye of the bull.