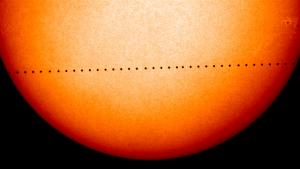 Mercury passes across the face of the Sun in this time-lapse image from 2006. Mercury will stage another transit on November 11, with most of the action visible from most of the United States. You should not look at the Sun directly, however, because it can cause eye damage. Instead, use eclipse glasses, or watch online. [NASA/SOHO]

A tiny black dot will crawl across the face of the Sun on Monday: the planet Mercury. Its passage will be visible across all of the United States except most of Alaska.

Such a passage is known as a transit. It’s possible only because Mercury is closer to the Sun than Earth is, so it regularly passes between Earth and the Sun. Mercury’s orbit is tilted a bit, though, so the little planet doesn’t transit the Sun on every crossing. Instead, transits occur only when the geometry is just right — when Mercury crosses the plane of Earth’s orbit at the right time.

Today, such crossings happen 13 or 14 times per century. They occur only within a few days of May 8th or November 10th. November transits happen when Mercury is farther from Earth, so it makes a smaller dot than during May transits.

All of Monday's transit will be visible from the eastern third of the U.S. For the rest of the country, it’ll be in progress at sunrise.

It begins at about 7:35 a.m. local time on the east coast, and ends at about 1:04 p.m. The times will be one, two, or three hours earlier as you move westward across the time zones.

Never look at the Sun directly, though. You need eclipse glasses or other protection to observe it. Even then, Mercury is so tiny that you probably won’t be able to see it. Instead, watch online, or visit a museum or other venue with safe Sun-watching equipment — for a glimpse of a transit across the face of the Sun.