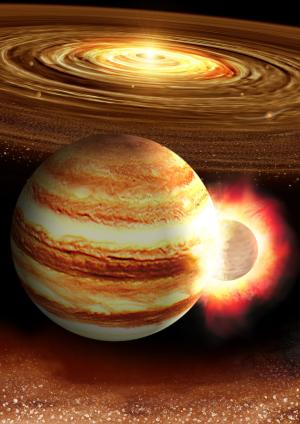 A small planet smacks into the young planet Jupiter in this artist's concept. Studies of Jupiter's interior suggest the giant planet was struck by a smaller body shortly after its birth. The impactor plunged into Jupiter's heart, mixing with the material in the core and making the core much less dense than expected. The scenario was suggested by observations of Jupiter's magnetic and gravitational fields made by Juno, an orbiting spacecraft. Those observations probe Jupiter's interior. [K. Suda & Y. Akimoto/Mabuchi Design Office/Astrobiology Center, Japan]

The young solar system was like a giant pinball machine. Planets and smaller bodies slammed into each other. Some ricocheted away, some were blasted to bits, and some stuck together, turning two planets into one.

One example of the “sticking together” may be Jupiter, the biggest planet in the solar system. A recent study suggested that it had a head-on collision with another body, resulting in a merger of the two worlds.

The Juno spacecraft has been orbiting Jupiter for three years. It makes precise measurements of Jupiter’s magnetic and gravitational fields. That probes Jupiter’s interior, allowing scientists to learn about the planet’s core.

The observations have been surprising. They suggest that instead of a small, dense ball, the core is wide and fluffy.

An idea for why that’s the case was proposed by a team from China and Rice University. The team ran thousands of simulations of impacts between the newborn Jupiter and another body. The best fit to what Juno has found was a head-on collision with a planet at least 10 times as massive as Earth.

That object mixed with Jupiter’s core, stirring up the core and making it bigger but much less dense. Some of the core material mixed with less-dense material around it. The core is still puffed up today — at the heart of giant Jupiter.

And Jupiter pairs up with the Moon this evening. The planet looks like like a brilliant star. It’s close to the upper left of the Moon as night falls.