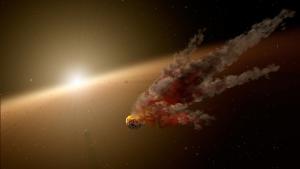 This artist's concept shows the aftermath of a collision between two asteroids orbiting NGC 2547-ID8, a star about 1200 light-years away in the southern constellation Vela. The star is quite young, so its encircling planetary system is still taking shape. Collisions between planetary building blocks, such as the impact depicted here, should be common, producing immense clouds of dust. Telescopes here on Earth have detected at least two eruptions of dust around NGC 2547-ID8.  [NASA/JPL]

Making planets like Earth is a messy business. Bits of dust and rock stick together to make giant boulders. The boulders sometimes ram together, blasting themselves to bits. And the broken bits can then stick together again to form larger bodies.

An example of that process is seen in a young star system in the southern constellation Vela.

NGC 2547-ID8 is in a star cluster that’s 1200 light-years from Earth. The cluster is only about 35 million years old, so its stars — and their planets — are still taking shape.

In recent years, a space telescope has seen a couple of big events in ID8. Both events resulted in a huge jump in the star’s infrared light — an indication that there was a huge infusion of new dust grains.

The first was seen seven years ago this week. Two large asteroids probably slammed together. That ripped both of them to shreds. The impact occurred at about the same distance from the star as Mercury is from the Sun — prime real estate for making rocky planets.

A second pulse of dust was seen in early 2014. Astronomers say that one probably was caused by the first. A big chunk of debris from the initial impact spiraled closer to the star, where it hit another asteroid.

This process adds lots of bits of dust and rock to the disk of debris around the star. These materials can stick together to form larger bodies — asteroids like those that collided, or planets — the result of the messy process of giving birth to new worlds.