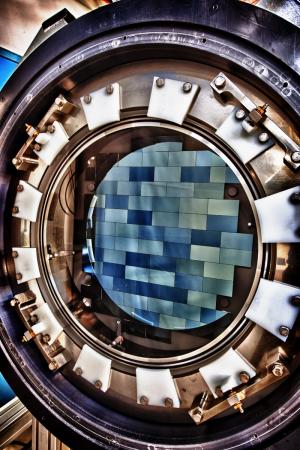 An array of charge-coupled devices sits at the heart of the Dark Energy Camera, which is attached to a telescope in Chile. The CCD array is one of the largest in the world. It converts light from distant stars and galaxies into electrical impulses, which are recorded to produce images. The CCD was invented 50 years ago, by a pair of researchers at Bell Laboratories, and over the last three decades has become a critical tool for most telescopes. The CCD collects far more light than film, and its images are much easier to process and store. [Reidar Hahn/Fermilab]

For a century, astronomers recorded most of their views of the universe on glass plates. By the 1980s, though, the plates were on their way out. They were being replaced by a new technology: the charge-coupled device, or CCD, which was invented 50 years ago this week.

Willard Boyle and George Smith were scientists at Bell Laboratories. They were working on a new type of electronic memory when they created what’s now known as the CCD. They realized the device could be used to take pictures. And within years, CCDs were at the hearts of digital cameras and video recorders.

A CCD takes advantage of the photoelectric effect, in which light can be converted to electrons. It was first described by Albert Einstein, and earned him his only Nobel Prize. Boyle and Smith earned the Nobel for their application of the effect.

Astronomers were among the first to adopt the CCD. The detectors are much more sensitive to light than photographic plates or film. That allows them to see objects that are fainter and farther away. CCDs are easier to use, too, and their images are easier to store and study. And CCDs are good for space telescopes and other craft because they’re lighter and more reliable than earlier electronics.

A CCD was first used on a ground-based telescope in the seventies. Many observatories began switching to the new detectors soon after that. By the end of the century, the takeover was complete — as astronomers cast these new “eyes” on the universe.