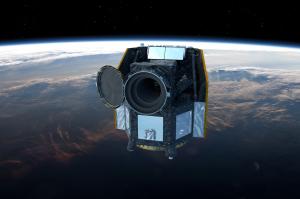 An artist's concept shows CHEOPS, a European space telescope, scanning the skies from Earth orbit. The craft is designed to follow up on the discoveries of planets in other star systems. It will monitor those systems to glean new details about the planets. Launch is scheduled for the last quarter of 2019. [ESA/ATG Medialab]

Much of what makes science work is following up. After the discoveries are made, more research is needed to fill in the details. And the launch window for a spacecraft that’s all about the follow-up opens next week.

CHEOPS is a European mission that will study exoplanets — planets that orbit stars other than the Sun. It won’t hunt for new planets. Instead, it’ll make detailed observations of star systems with known planets.

CHEOPS will look for the planets to pass in front of their parent stars. Such a passage is called a transit. It causes a tiny “dip” in a star’s light. How much the star dims, and how long the transit lasts, reveals the size of the planet. Scientists especially want to study worlds that are between the size of Earth and the size of Neptune, the Sun’s fourth-largest planet.

CHEOPS will keep an eye on target stars between transits as well. That’ll allow it to see how much starlight a planet reflects. From that, astronomers can deduce whether the planet has an atmosphere, and whether the atmosphere is topped by clouds.

It’s possible that CHEOPS will find more planets orbiting its target stars — giving it a chance to follow up on its own discoveries.