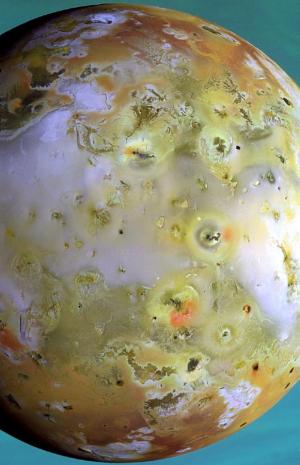 Io, one of the largest moons of Jupiter, passes in front of the planet's clouds in this false-color image from the Galileo spacecraft. Io is the most volcanically active body in the solar system, with more than 400 known volcanic features. The largest is Loki Patera -- a pool of lava that covers an area the size of New Jersey. [NASA/JPL/Univ. Arizona]

The most impressive tides on Earth vary by about 50 feet from high tide to low tide. But that’s barely a jiggle compared to the tides on Io, one of the moons of Jupiter. Its tides vary by the height of a 30-story building. That’s especially impressive when you consider that the rising and falling is in Io’s crust.

The tides have a serious impact on Io, which is about the same size as our own Moon. They create hundreds of volcanoes — more than on any other world in the solar system. And the volcanoes are giants. The biggest of them dwarf anything seen on Earth.

Io’s tides are caused by a non-stop tug of war between Jupiter and some of its other big moons. Their gravity pulls Io in different directions, stretching and squeezing its interior. That generates huge amounts of heat, which melts rock below the surface. Some of the magma pushes to the surface, forming volcanoes.

The biggest is Loki Patera, a pool of lava that covers 8,000 square miles — almost as big as New Jersey. It generates about 10 percent of Io’s heat. It last erupted in July. Its eruptions probably happen after the surface of the lava pool cools and hardens. The solid rock sinks and fresh lava rises to the surface — allowing Loki Patera to shine again.

And Jupiter is shining quite close to our moon tonight. The planet looks like a brilliant star. It’s to the lower right of the Moon as darkness falls. Through binoculars or a telescope, Io looks like a tiny star close to the giant planet.