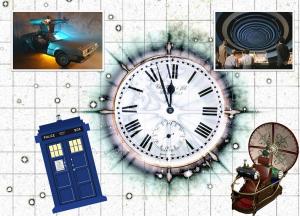 Physicists will meet in Italy in September to ponder the science of time travel. Although they probably won't invent any Time Tunnels, Tardises, or time-traveling DeLoreans, they may develop a better understanding of the physics that might allow travel through time. [Pixabay]

Time travel has two vocabularies. For most of us, it’s Tardises, DeLoreans, and time turners. For scientists, though, it’s wormholes, naked singularities, and closed time-like curves.

Physicists will be tossing those terms around next week at a conference in Italy. They probably won’t come up with a new device for heading back in time. But they may come up with a better understanding of the science behind time travel.

Traveling through time is allowed by General Relativity, Albert Einstein’s theory of gravity.

A naked singularity, for example, would be like the center of a black hole without the surrounding black hole. That would allow you to pass near the dense concentration of matter without getting trapped. Instead, it might fling you elsewhere in time.

A closed time-like curve would bring an object that followed that curve back to its starting point in space and time. In effect, the object would move back in time.

There are many problems with time travel, though. It violates the idea that things should happen in a certain order; we’re born before we die, for example. And there are practical considerations. Most concepts of time travel require huge amounts of energy, or non-existent forms of matter. Still, they’re not ruled out by the laws of physics, so they’re worth spending a little time on.