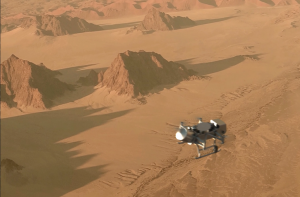 An artist's concept shows the Dragonfly drone above Titan, the largest moon of Saturn. NASA recently approved the mission for launch in 2020. It will land in a dune field near Titan's equator. It will fly to a new location each Titan day (about 16 Earth days), then land and analyze rocks on the surface, listen for quakes, and measure Titan's weather. Titan has a dense, cold atmosphere, along with clouds and rains of methane and ethane. [JHUAPL]

Drones are everywhere these days. Everywhere on Earth, that is. But they’re about to buzz other worlds as well. A small one will head for Mars next year. And a much bigger and more sophisticated one will be sent toward the biggest moon of Saturn in 2026, with arrival eight years later.

That one is known as Dragonfly. It’ll be about the size of a lawnmower. Its nuclear generator will power it for years, allowing it to fly more than a hundred miles through the atmosphere of Titan.

Titan is one of the most intriguing worlds in the solar system. It’s as big as Mercury, the smallest planet. It has an atmosphere that’s denser than Earth’s. It has clouds, rains, and rivers and lakes. Because the temperature hovers near 300 below zero, though, the liquids are methane, not water. But a giant ocean of water may lie far below the surface. That combination of ingredients means Titan is a place to look for signs of life.

Dragonfly will land in a dune field near Titan’s equator. Each Titan day — about 16 Earth days — it’ll fly to a new location. It will analyze rocks on the surface, listen for quakes below the surface, and measure Titan’s weather. In particular, it’ll look for the chemical building blocks of life. And it’ll look for evidence of current life on this intriguing world.

Look for Saturn to the right of our own moon tonight. It looks like a bright star. Good binoculars or a telescope will reveal Titan, shining like a tiny star near the giant planet.